The detection of Norepinephrine and Epinephrine in-vitro

Adrenaline (Epinephrine, EPI) is the major hormone secreted by the adrenal medulla, the structure belongs to the catecholamines, shown in Figure 1, It has a strong activating effect on α and β receptors. After binding with the corresponding receptors on the cell membrane, the heart rate raises, myocardial contractility becomes stronger, cardiac output increases, normally it acts as cardiac emergency medicine clinically; Norepinephrine (NE) comes from adrenaline after removing Nmethyl, also belongs to the catecholamines, shown in Figure 2. NE is an α receptor agonists, its main function is to maintain angiotasis, it could quickly adjust to maintain blood pressure to ensure the body circulation in emergency mechanism, and often acts as a vasopressor clinically; Its detection has profound meaning on clinical diagnosis. Circulating NE in blood is mainly from the adrenal medulla, synthetized and secreted by the adrenal medulla. So most often, the blood samples are ideal for assaying, but tissue samples sometimes encounter low value during measurement.

Considering NE are same in various species, thus we developed a series of NE-coupled molecule, specific antibodies and Elisa kits. As NE is a small molecule, it requires to get immunogenicity by conjugating to vectors, EPI is similar to NE. Following is the development process of NE products.

We adopts glutaraldehyde to couple NE with BSA, OVA and obtained BSA Conjugated NE(CPA907Ge11), OVA Conjugated NE (CPA907Ge21). The OVA- NE has immunized the rabbit to get antiserum, then we get specific anti- NE polyclonal antibodies(PAA900Ge01). Then coupled with FITC to have(PAA907Ge81). It has been tested by Western blot and IHC. The PAB824Hu01 has gone for WB with serum, the result is as Fig 3, and the IHC result is as Fig4. The IHC was tested with human brain, and it turns that it is mainly secreted. 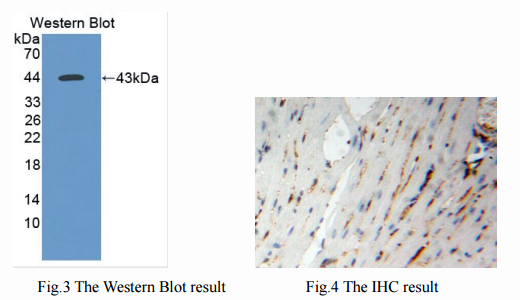 On the development of coupling moleucles and antibodies, we developed NE Elisa kit(CEA907Ge). As NE is a micromolecule and exists same in different species, so the antibodies and kit could be used to detect NE from different species.