Tumor protein p53 (P53, TP53) is an important protein coded by TP53 gene, it could inhibit tumor through regulation of cell cycle. Previously the main research directions on p53 are the function and mechanism in tumor inhibition.

Previous studies showed that the calculated molecular weight of p53 is 43.7kDa, according to the amino acids of the protein, but the molecular weight (MW) shown in SDS-PAGE is 53kDa. The reason leads to this difference in molecular weight lies in the abundance of proline residue in the protein, and this phenomenon shows not only in human p53, but also in p53 of other species, including rat, mouse, frog and so on.

The MW difference is in accordance with the phenomenon found in our recombinant protein research. From the SDS-PAGE pic. of recombinant human, mouse and rat p53 protein (RPA928Hu01, RPA928Mu01, RPA928Ra01), it is found that the MW shown in the pic. is larger than the theoretical calculated MW (Figure1). 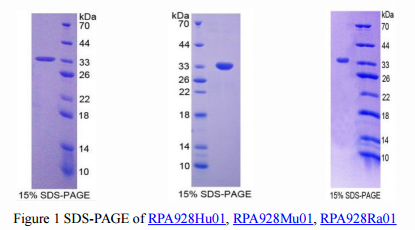 Based on recombinant p53 protein, we had developed various polyclonal antibodies (PAA928Hu01, PAA928Mu01, PAA928Ra01), monoclonal antibodies (MAA928Hu22, MAA928Ra21) and quantification analysis kits (SEA928Hu, SEA928Mu, SEA928Ra), these products are widely used in anti-tumor research field. From the feedback of customers, their research data had been published in Anticancer Research, and the title is Analysis of p53 and miRNA Expression after Irradiation of Glioblastoma Cell Lines. As the new function of p53 in heart disease research was found, p53 related products could also be used in the cardiovascular research field.