New targets for the treatment of obesity and related diseases

The dangers of obesity

The persistent imbalance between energyintake and energy consumption results inobesity, which causes acommon disorder called metabolic syndrome, with various comorbidities. These include type 2 diabetes, hypertension, nonalcoholic steatohepatitis(NASH), cardiovascular diseases and cancer, which may lead to death. Worldwide, 1.9 billion adults are overweight and 600 million are obese, and 51% of the global population is predicted to be obese by 2030. Thus, obesity is a major global health problem with increasingly alarming incidence.

Despite efforts to find safe, effective obesity treatments, current options are limited, mainly due to insufficient knowledge about the pathophysiology and mechanisms of fat accumulation. Moreover, many therapeutic agents have been withdrawn due to severe side effects. Bariatric surgical procedures are the most effective options for reducing body weight but are restricted to people with morbid obesity, due to risks of surgical complications, mortality and reoperation. Increased understanding of the mechanisms involved is urgently needed to find new drug candidates that boost weight loss and ameliorate metabolic syndrome.

Intermittent fasting (IF), as a dietary intervention for weight loss, takes effectsprimarily through increasing energy expenditure. Inter-organ crosstalk of whole-body energy balance, especially of the BAT activation mediated anti-obesity, is a new frontier in the field. On 13 September, 2021, Wanzhu Jin from Chinese Academy of Sciences and his team published an article in "Advanced Science" that define a previously unrecognized crossorgan communication system that IF improves whole-body metabolism through liver-BAT interaction, which is critical for IF induced metabolic remodeling[1]. Further, they found that fasting-refeeding signals induced the liver to produce and release PZP into circulation and followed by the translocation of GRP78 to the cell surface in BAT. Then PZP-GRP78 interaction promotes UCP1 expression via p38 MAPK-ATF2 signaling, promoting BAT thermogenesis(Fig 1). Future clinical studies are needed to explore the therapeutic potential of PZP for the development of precision medicine to treat obesity and related diseases. 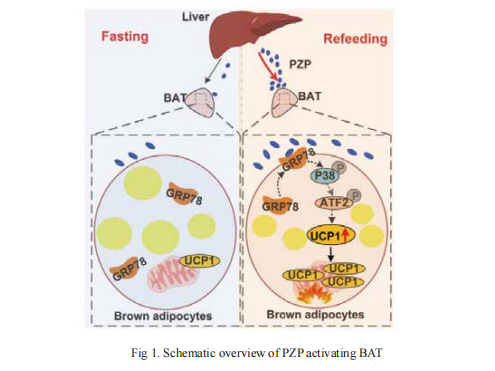 To unravel the pathogenesis of obesity and its complications, Eleonore Maury from UCLouvain, Brussels, Belgium and his team investigate the interplay between circadian clocks and NF-κB pathway in human adipose tissue[2]. The circadian clock function is impaired in omental fat from obese patients. NF-κB competes with BMAL1 for transcriptional control of some targets. Obesity relocalizes BMAL1 occupancy genome-wide in human omental fat, thereby altering the transcription of numerous target genes involved in metabolic inflammation and adipose tissue remodeling. Eventually, clock dysfunction appears at early stages of obesity in mice and is corrected, together with impaired metabolism, by NF-κB inhibition. In addition, Baojian Wu from Guangzhou University of Chinese Medicine and his team published an article in "Nature Communications" on 7 September, 2021, which reported the role of intestine clock in energy homeostasis remains elusive[3]. They showed that mice with Bmal1 specifically deleted in the intestine (Bmal1iKO mice) have a normal phenotype on a chow diet. However, on a high-fat diet (HFD), Bmal1iKO mice are protected against development of obesity and related abnormalities such as hyperlipidemia and fatty livers(Fig 2). Mechanistic studies uncover that BMAL1 transactivates the Dgat2 gene (encoding the triacylglycerol synthesis enzyme DGAT2) via direct binding to an E-box in the promoter, thereby promoting dietary fat absorption. Moreover, small-molecule targeting of REV-ERBα/BMAL1 by SR9009 ameliorates HFD-induced obesity in mice. Altogether, these studies show that targeting BMAL1 may be a promising approach for management of metabolic diseases induced by excess fat intake. 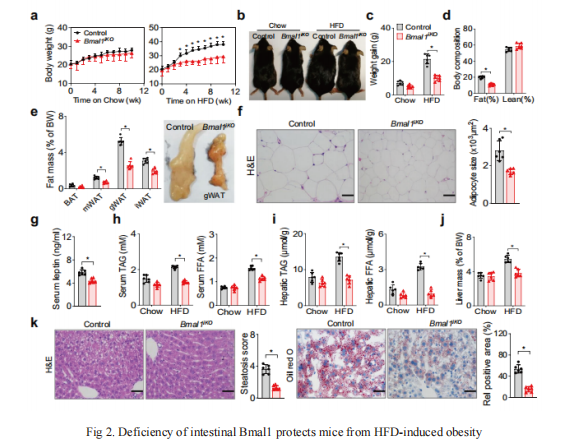 3. Inhibition of the IL-17A axis in adipocytes suppresses diet-induced obesity and metabolic disorders in mice

Nabil Djouder and his team from Centro Nacional de Investigaciones Oncológicas, Spain, published an article in Nature Metabolism[4]. They demonstrated that abolishing the interleukin-17A (IL-17A) axis in mice by inhibition of RORγt-mediated IL-17A production by digoxin, or by ubiquitous deletion of IL-17 receptor A (Il17ra), suppresses diet-induced obesity (DIO) and metabolic disorders, and promotes adipose-tissue browning, thermogenesis and energy expenditure. IL-17A produced in response to DIO induces PPARγ phosphorylation at Ser273 in adipocytes in a CDK5-dependent manner, thereby modifying expression of diabetogenic and obesity  genes, which correlates with IL-17A signalling in white adipose tissues of individuals with morbid obesity(Fig 3). These results suggest that targeting the IL-17A axis could be an efficient antiobesity strategy. 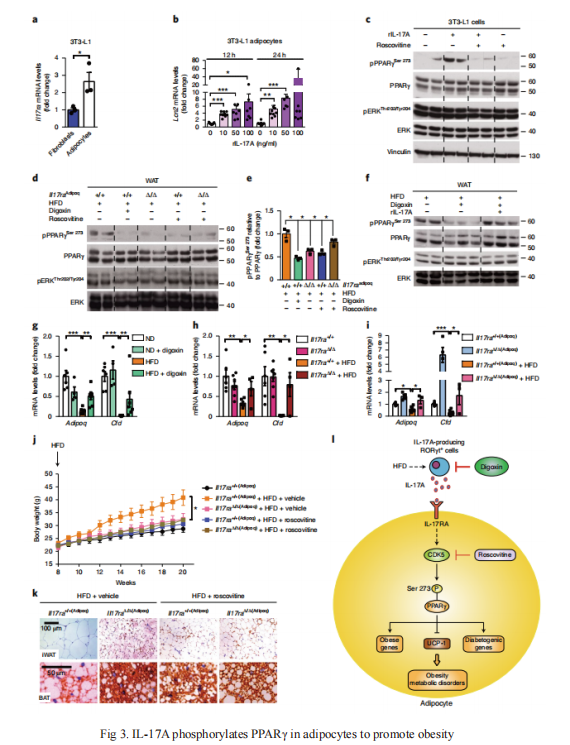 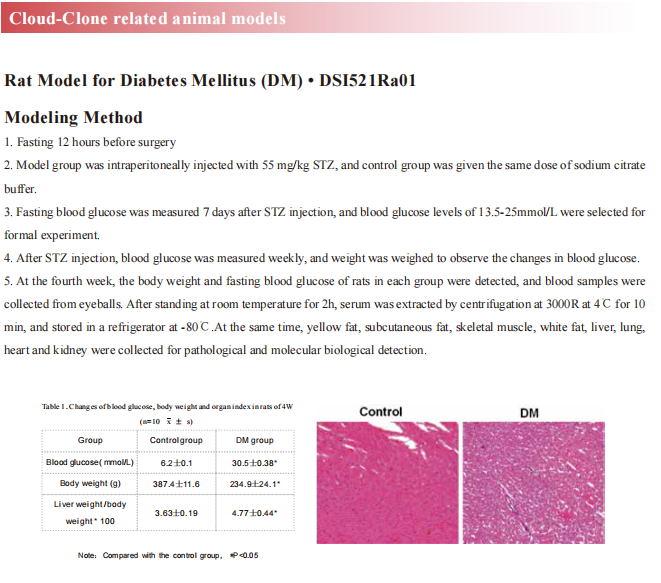 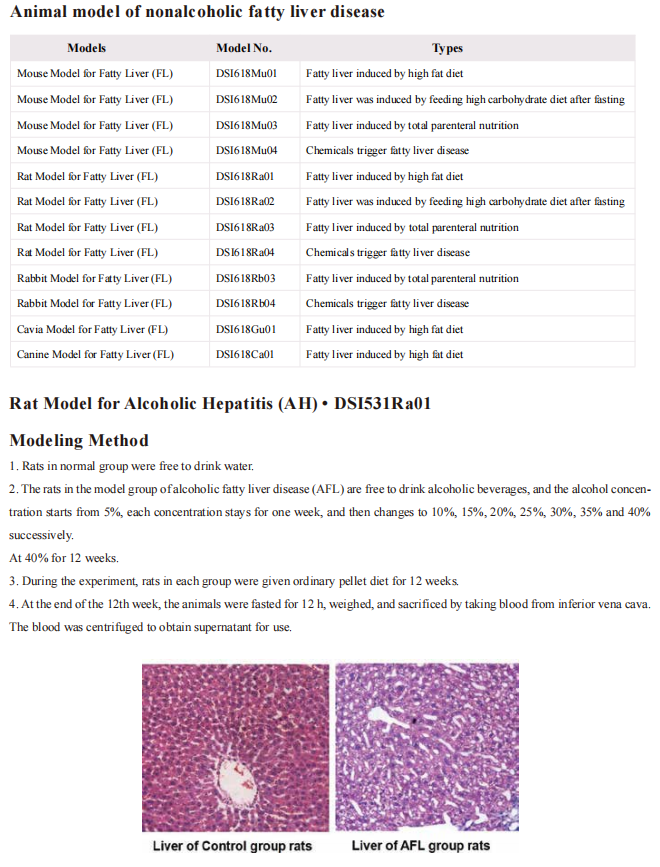