Recently, bats are the hottest internet celebrities in the animal world. Here we should say sorry to pangolin. The SARS-CoV-2 is causing an outbreak of viral pneumonia after SARS-CoV. This outbreak began in the city of Wuhan, Hubei Province, China in the early December 2019. Then it continues to spread throughout China. According to many researches, bats are the original source of SARS-CoV-2. As a movable virus reservoir, bats are invulnerable to attack from a variety of formidable viruses, such as EBoV, MV, RV, SARS-CoV, MERS-CoV, SARS-CoV-2 and so on. People are often curious about bats antiviral ability.

Why are the bats invulnerable to attack from viruses?

What makes bats so special?

From the evolutionary perspective, bats have a strong ability to repair DNA damage. According to the research of Wuhan Institute of Virology, CAS, there are lots of positive selection genes in the DNA damage repair pathway of bats (Zhang et al, science 2013). Through comparative analysis of the genomes of fruit bat and David mouse ear bat (insectivorous bat), it has been found that a series of genes are related to DNA damage checkpoint or DNA repair pathway. Among them, c-REL (a NF-κB family transcription factor) not only plays a role in innate immunity, but also has a certain relationship with DNA damage response1. Bats are the only mammals that can fly. Their improved DNA damage repair ability help them to resist the high metabolic rate and high oxidative stress caused by flying. Some scientists speculate that the unique mechanisms to keep bats’ immune system in an "active" state is endowed from evolution by the pressure and cell damage. To confirm this conjecture, further studies are needed.

From the immunity perspective, the special immune system of bats plays a great role as well. Interferon (IFN) is the pioneer to defense virus for the mammalians. When the body is infected by the virus, the infected cells will release interferon and stimulate the surrounding cells to initiate immune response to defence the virus infection promptly. However, a large number of interferon can also cause the autoimmune-mediated destruction and enhance the secretion of inflammatory factors, which may result in the excessive inflammatory response and cause damage to the own body. In 2005, Huang KJ, Su IJ, et al. published an article revealed that SARS-CoV infection can induce IFN γ related cytokine storms, which may lead to immunopathological damage in SARS patients2. Unlike other mammals, bats can continuously express interferon, an anti-virus factor, to resist the virus invasion by interfering with the virus replication. Besides, it hasn’t initiated the inflammatory reaction. That is why bats can always be in the state of anti-virus without causing their own bodies damage. In 2016, the article, published on the cover of PNAs, reported the adaptive mutation of interferon in bat evolution (Zhou et al, PNAs, 2016) 3. Unlike other mammals, the higher level of IFNα in normal tissues keeps bats in a state of "All-Day Defense". 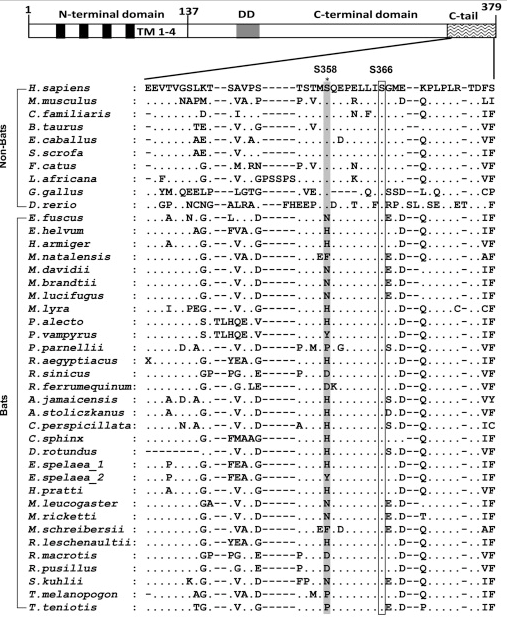 Keep the immune system active for a long time will not damage bats’ tissues and organs, which is also the unique feature of the bats' immune system. An genomic  analysis in 10 bat species revealed the absence of the PYHIN gene family. PYHIN family is the only identified class of DNA sensors capable of activating the inflammasome, and its absence may indicate the weakened inflammatory response4.

Moreover, researchers found the point mutation at S358 of bats’ STING (Fig. 1) from sequence alignment of STING of more than 30 different bat species 5, which greatly reduces the activation and antiviral effect of downstream interferon. That is to say, bats is capable to regulate their immunity to defense against the virus and protect themselves from viruses in a effective and appropriate way. The S358 mutation of bats STING, accompanied by the decrease of TBK1 activity and downstream IRF3 phosphorylation level (Fig. 2) 5, may be the reason for weakened IFN mediated inflammatory response. Maybe it is the relaxed immune environment that makes bats invulnerable to viruses . 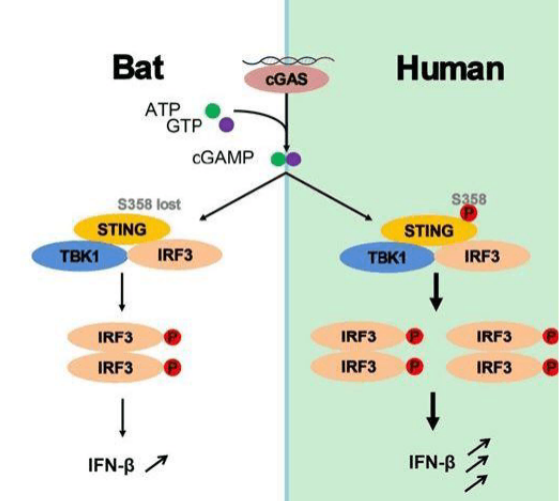 New aspects on the treatment of COVID-19

In addition, patience with severe COVID -19 may have severe inflammatory reaction, which damage their tissues and organs. In order to effectively block the "cytokine storm", some drugs, used to reduce the TBK1 activity, are gradually included in clinical treatment and research. For example, amlexanox - an inhibitor of TBK1, can reduce the inflammatory response through the inhibition of TBK1; The covalent inhibitors of STING can reduce the phosphorylation level of TBK1 by blocking  STING palmitoylation.

With the continuous study of the SARS-CoV-2 pathogenesis, drugs and vaccines, it is hoped to find the antidote for COVID-19 and end the epidemic soon.

Cloud-Clone developed a serial related products, including proteins, antibodies and detection kits. Below is our product list (partial). Hope it can contribute to the research of SARS-CoV-2.