Potential Target for Drug of SARS-CoV-2

The outbreak of Corvid 19 leads to more than two millions patients in the world. Researchers from various countries had done extensive work in studying the mechanism of virus infection, screening of effective drugs and searching for potential targets for new drugs. Previously studies showed that the invasion of the virus depends on ACES, CD147 and TMPRSS2.

In March, A SARS-CoV-2-Human Protein-Protein Interaction Map Reveals Drug Targets and Potential Drug Repurposing was jointly researched and published on Biorxiv by researchers from the United States, Britain and France.

By analyzing the genome of SARS-CoV-2, 28 viral proteins were cloned and expressed, including 4 structural proteins (S, M, N, E), 15 non-structural proteins forming the replicase / transcriptase complex (Nsp1, 2, 4-15 and Mutants of NSP5) and 9 putative accessory factors (Orf3a, 3b, 6, 7a, 7b, 8, 9b, 9c, 10). Then, affinity purification-mass spectrometry analysis identified 332 protein interactions between SARS-CoV-2 proteins and human proteins. Moreover, it was found that viral proteins are related to various biological processes, including protein trafficking, translation, transcription, and ubiquitination regulation.

After that, through chemoinformatics databases and analyses (Methods), of the 332 human targets that interact with the viral bait proteins with high significance, 62 have drugs/INDs/preclinical molecules that modulate them. Researchers are currently evaluating for efficacy of these molecules in live SARS-CoV-2 infection assays. At the same time, it is hoped that the analysis in this paper will provide important molecular targets for the development of broadly effective antiviral therapeutics against SARS-CoV-2 and other deadly coronavirus strains (Table 1). 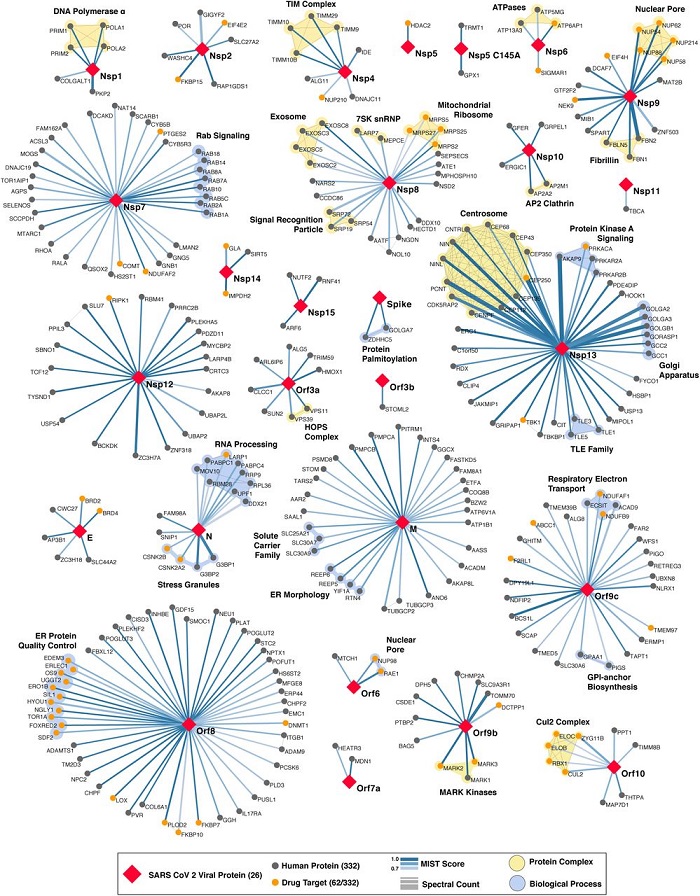 In April, Italian researchers published the article Master Regulator Analysis of the SARS-CoV-2/Human Interactome in the Journal of Clinical Medicine. Based on the current knowledge of the interactome between SARS-CoV-2 and host cell proteins, they performed Master Regulator Analysis to detect which parts of the human interactome are most affected by the infection. And the result showed that apoptotic, mitochondrial mechanisms and a downregulation of the ACE2 protein receptor were most affected. Targets in these pathways could be used to develop specific therapies against the new virus (Table 2). 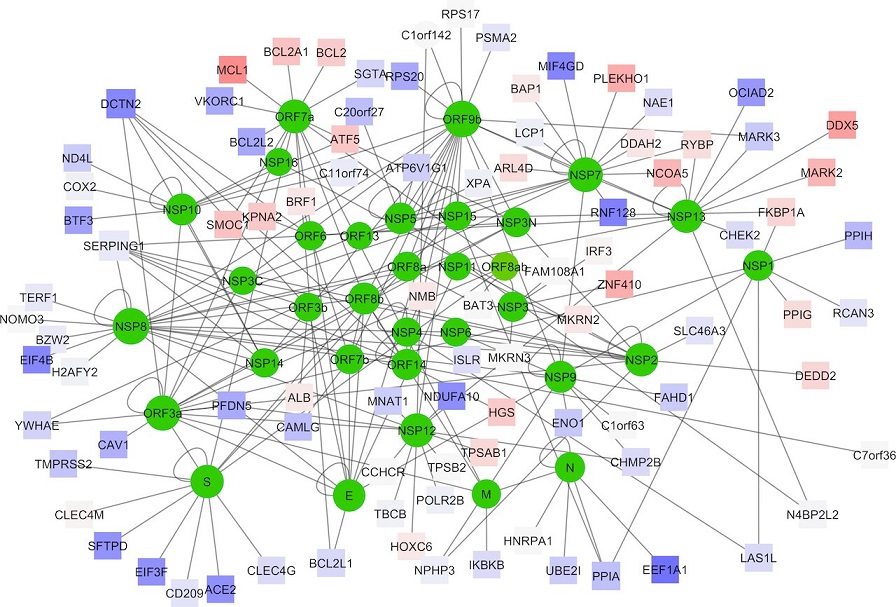