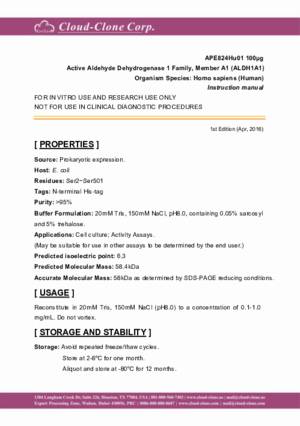 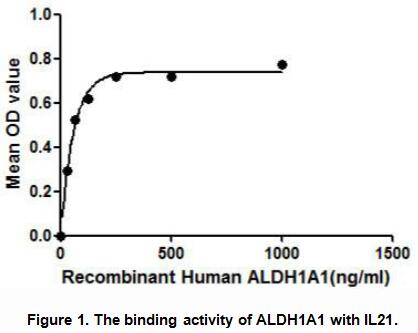 ALDH1A1 (Retinal dehydrogenase 1) which belongs to the aldehyde dehydrogenase family, is the next enzyme after alcohol dehydrogenase in the major pathway of alcohol metabolism. ALDH1A1 converts retinaldehyde to retinoic acid. IL21 (interleukin 21) was identified as an interactor of ALDH1A1 through Affinity Capture-MS. Thus a binding ELISA assay was conducted to detect the interaction of recombinant human ALDH1A1 and recombinant human IL21. Briefly, ALDH1A1 were diluted serially in PBS, with 0.01%BSA (pH 7.4). Duplicate samples of 100uL ALDH1A1 were then transferred to IL21-coated microtiter wells and incubated for 2h at 37℃. Wells were washed with PBST and incubated for 1h with anti-ALDH1A1 pAb, then aspirated and washed 3 times. After incubation with HRP labelled secondary antibody, wells were aspirated and washed 3 times. With the addition of substrate solution, wells were incubated 15-25 minutes at 37℃. Finally, add 50µL stop solution to the wells and read at 450nm immediately. The binding activity of ALDH1A1 and IL21 was shown in Figure 1, and this effect was in a dose dependent manner.

Avoid repeated freeze/thaw cycles. Store at 2-8°C for one month. Aliquot and store at -80°C for 12 months.

The thermal stability is described by the loss rate. The loss rate was determined by accelerated thermal degradation test, that is, incubate the protein at 37°C for 48h, and no obvious degradation and precipitation were observed. The loss rate is less than 5% within the expiration date under appropriate storage condition.