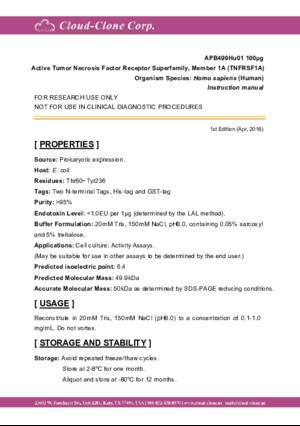 Figure. The apoptosis of A549 cells by TNFα was inhibited by TNFRSF1B.
Tumor necrosis factor receptor superfamily member 1B (TNFRSF1B), also known as tumor necrosis factor receptor 2 (TNFR2) and CD120b, is a membrane receptor that binds tumor necrosis factor-alpha (TNFα). This protein and TNF-receptor 1 form a heterocomplex that mediates the recruitment of two anti-apoptotic proteins, c-IAP1 and c-IAP2, which possess E3 ubiquitin ligase activity. TNFRSF1B can inhibit cell apoptosis which induced by TNFα. Briefly, A549 cells were seeded into triplicate wells of 96-well plates at a density of 2,000 cells/well and allowed to attach, replaced with serum-free overnight, then the medium was replaced with 2% serum standard DMEM including 1μg/mL TNFα and various concentrations of recombinant human TNFRSF1B. After incubated for 96h, cells were observed by inverted microscope and cell proliferation was measured by Cell Counting Kit-8 (CCK-8). Briefly, 10µL of CCK-8 solution was added to each well of the plate, then the absorbance at 450nm was measured using a microplate reader after incubating the plate at 37°C for 1-4 hours. Apoptosis of A549 cells had been inhibit after incubation with TNFRSF1B for 96h observed by inverted microscope was shown in Figure 1. Cell viability was assessed by CCK-8 (Cell Counting Kit-8) assay after incubation with recombinant TNFRSF1B for 96h. The result was shown in Figure 2. It was obvious that TNFRSF1B significantly suppress cell apoptosis induced by TNFα.
(A) A549 cells cultured in DMEM contain 1μg/mL TNFα and 0.1ng/mL TNFRSF1B for 96h;
(B) A549 cells cultured in DMEM only contain 1μg/mL TNFα for 96h. 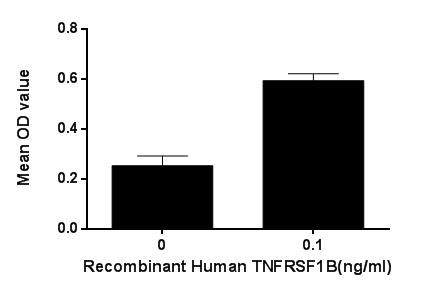 Figure. TNFRSF1B suppress the apoptosis of A549 cells induced by TNFα.

Avoid repeated freeze/thaw cycles. Store at 2-8°C for one month. Aliquot and store at -80°C for 12 months.

The thermal stability is described by the loss rate. The loss rate was determined by accelerated thermal degradation test, that is, incubate the protein at 37°C for 48h, and no obvious degradation and precipitation were observed. The loss rate is less than 5% within the expiration date under appropriate storage condition.